At first glance I have next to nothing in common with the dudebro jocks that are the leads of this film. But Richard Linklater’s screenplay proves that great writing transcends little details like that. This is an extremely sharply written, human, funny, and profound hangout movie that happens to depict a very specific college experience. It’s an impressive achievement, to take such a barebones plot (a group of college baseball players party away the few days before term begins) and get so much storytelling mileage out of it. Everybody Wants Some!! is a very particular kind of Americana, and shows that a great movie can come from anywhere.

16) Kubo and the Two Strings

Look, stop motion animation is just cool. And when it’s wedded to visuals this beautiful and emotions this rich, it goes to a higher level. Set in a fantasy version of Japan, this fairy tale about family and the power of storytelling has no shortage of grand adventure, painful pathos, and unforgettable villains.

A damn fine comedy, with near-perfect cast dynamics. Ghostbusters strikes a nice balance between being SNL sketchy and committing to its science fantasy premise. So on the one hand, there’s plenty of tech and technobabble, and on the other, there’s a lot of improv-based comedy that goes a bit off the rails once in a while before reining back in. Kate McKinnon and Chris Hemsworth in particular get the most laughs, but everyone has something to contribute. All around charming. And there’s something oddly satisfying about seeing people shoot streams of radically polarized protons at ghosts. 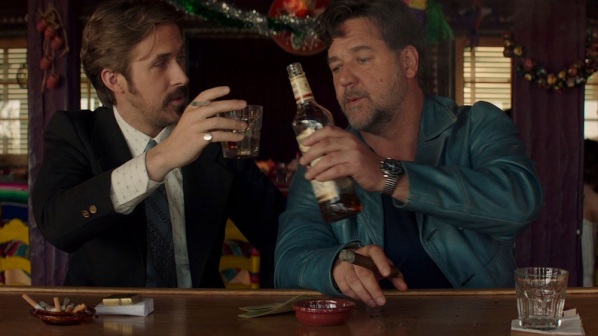 Ryan Gosling and Russell Crowe are an inspired pair in writer-director Shane Black’s evocative 1970s-set action comedy. Gosling in particular turns in a performance spun out of comedy gold as a drunken private detective, and the movie’s sense of place is impeccable. 70s Los Angeles provides an ideally seedy background to this warped conspiracy romp.

13) Hunt for the Wilderpeople

The most domestically successful New Zealand film of all time, Hunt for the Wilderpeople launches what can only be called an hour-and-a-half charm offensive. Orphan and wannabe “gangster” Ricky Baker (Julian Dennison) runs away into the wilderness but needs the help of his grumpy adoptive uncle Hec (Sam Neill, who in a one-man promotional tour took the film all over rural New Zealand) to survive out there. Hilarity and poignancy ensue.

When a punk band takes a gig at a skinhead-controlled bar, they see something they shouldn’t have and hole themselves in the green room to survive the night. This shockingly relevant tale of hipsters vs. Neo-Nazis is told with breathless economy, making for a pure cinematic experience. And the ride is thrilling not just for the knife-edge intensity but also for the extreme efficiency of the storytelling. This is an airtight screenplay if there ever was one.

Star Trek gives itself an excellent 50th anniversary gift in Star Trek Beyond, essentially a big-budget version of an original series episode with the action and character development dialed up to 11. Promoting cast member Simon Pegg to co-writing duties pays big dividends, as the film is built on a foundation of strong character, whether it’s Spock and Bones sparring while isolated or Kirk rediscovering what this whole trek through the stars thing is all about. It’s a really nerdy blockbuster, where a character spouting a humanistic platitude is the equivalent of an action movie one-liner. Contains two show-stopping scenes: the approach to starbase Yorktown, scored to magisterial perfection by Michael Giacchino; and another deployment of music more cacophony than symphony.

An endlessly endearing coming-of-age tale. Conor, a teen in mid-1980s Ireland, tries to impress a local girl by offering her a part in his band’s latest music video. Naturally, the next step is to grab a bunch of mates, and, you know, start a band. The charm of the band, named Sing Street after the repressive school the boys attend, is that they’re both quite talented, and embarrassingly amateurish. Even after weeks turn into months, you’ll still find a couple Sing Street compositions lodged in your head.

She captured a feeling / A sky with no ceiling / A sunset inside a frame / Here’s to the ones who dream / Foolish as they may seem. Another musical! Emma Stone and Ryan Gosling cut a bit of a Ginger Rogers/Fred Astaire rug in this nostalgic throwback to retro Hollywood Technicolor musicals. She wants to be an actress, he a jazz pianist with his own club. Sparks fly, romance ensues, all to the backdrop of the promise and heartbreak of Los Angeles. Ecstatic but also profoundly bittersweet.

Notorious filmmaker Oliver Stone shoots this sharply relevant Edward Snowden biopic beautifully, telling an extremely timely story with a deft hand. The film is unabashedly on Snowden’s side (a subversively patriotic score accompanies the copious computer action), so a measured or nuanced debate will not be found here. But this narratively ambitious biopic is always vividly brought to life, and I find it hugely engaging.

Eye in the Sky takes the simplest of starting points – “let’s use a case study to tackle the ethics of drone warfare” – and spins an unbearably tense thriller out of it, turning the screws on the audience with tactical precision. One of the very best ensembles of the year, including Helen Mirren and the late Alan Rickman, wrings their hands with edge-of-your-seat results.

Close Encounters of the Third Kind meets Interstellar. After extraterrestrial craft hover over 12 locations around the globe, Amy Adams’ linguist is recruited by the United States government to communicate with the aliens who’ve come to their backyard. Arrival is a classic science fiction concept atmospherically shot, bolstered both by universal humanistic themes and what’s probably the twist of the year.

5) Rogue One: A Star Wars Story

The first “standalone” Star Wars film is based on the heist of the Death Star plans that kicked off the plot of the original 1977 film. And so Rogue One is large-scale fanservice, but it also happens to have great original characters and takes a lot of risks. The trick is that it’s a love letter to Star Wars (the ending made me cry), but it fundamentally changes its texture. In the lead-up to the movie, the talking points were obvious. “Puts the Wars in Star Wars.” “The gritty side of the universe”, blah blah blah. It’s one thing to hear the sound bites, but to see this saga taken out of the good vs. evil fairy tale realm so elegantly is something else entirely. Star Wars has always worked best as an underdog story (witness how The Force Awakens reconstructs the Empire vs. Rebellion conflict by another name), but the heroes here are underdogs even within the Rebellion; and the villain they face is an underdog within the Empire. Rogue One is a smart, weird, exciting, emotional, unique, and occasionally sloppy blockbuster, and I love it.

Daniel Radcliffe as a farting corpse. Yep, that’s the one. That might imply a certain kind of movie, something cooked up by giggling fratboys. And Swiss Army Man is super scatological, but it’s also one of the most profound, human, and life-affirming film in recent memory. And in an act of mad genius, the act of farting is the key to its themes. Paul Dano stars as a castaway about to end it all before a corpse washes up on shore to provide the unlikeliest of hopes, and this survival tale revolves around the wacky and wonderful bond the two forge. To describe more would be to reduce the film. The only possible misstep is the tonally confusing ending, but it’s a rare wobble in a truly innovative statement, and the best dramedy of the year.

Sometimes a movie is so up your alley it feels made just for you. My favorite actress Jessica Chastain, in fierce form, dominating a hyper-fast-talking political thriller? Yes, please! Chastain is the titular gun control lobbyist, characterized by the old cliché of her being brilliantly manipulative and brilliantly impolite. Think Sherlock Holmes on the hunt for senatorial votes. It’s an old familiar template, but damn if this isn’t a great version of it. The film is Aaron Sorkin-esque almost to the point of imitation, but it really works. Miss Sloane is a movie that’s kind of always impressed with itself, but I’m right there with it.

The pinnacle achievement of Marvel Studios. And maybe that’s because Captain America: Civil War contains multitudes: it’s a deeply personal story about hanging on to the past, a globe-hopping political thriller, an espionage/revenge tale, an introduction to two important new superheroes, and of course, it has that six-on-six action extravaganza. But in spite of all that stuff, the third act pares everything down to the essentials, then makes the title bout between Steve Rogers and Tony Stark utterly painful, then offers a perfectly ambiguous grace note of hope on its way out the door. This is some mighty impressive storytelling. It’s always a joy to catch up with the Marvel Cinematic Universe’s stable of likable characters, but Civil War goes above and beyond, having fun with them while also putting them through the wringer. I don’t know how subsequent Avengers team-up movies can walk a narrative balancing act as effortlessly as this one, but I can’t wait to see them try.

Moana viscerally reminds me why I love musicals. Sometimes a character pouring her or his heart out in song has a primal power. It’s such a simple idea, and that directness can mean a lot. Moana is the chieftain’s daughter on a nonspecific Polynesian island, and chafes against a preordained life on the island, longing instead to voyage on the open sea. So far, so familiar. But the execution of this coming-of-age story is off the charts good, with a few casually genius thematic things going on. This is not even to mention the stunning animation or gorgeous songs, co-written by Disney’s new golden boy, Lin-Manuel Miranda. There’s a line where the sky meets the sea and it calls me / But no one knows / How far it goes. Moana is the complete package of adventure, emotion, character, and charm. I can’t remember the last time I cried so much at a movie.

Be warned, though. There’s one bad joke in the film. Shock and horror!

And to see these 17 film posters looking all nice together, visit http://letterboxd.com/paulstanis/list/my-favorite-films-of-2016/