Valerian and the City of a Thousand Planets (2017) Mini-Review

For about five minutes at the beginning of Luc Besson’s latest gonzo science fiction romp, we are shown the building of a utopia. A montage of diplomacy, this opening shows how earthbound nations begin to cooperate in the arena of space, and then without skipping a beat, how humanity goes on to welcome various alien races as friends. The International Space Station gradually becomes bigger and bigger as more and more cultures add to its diversity; the core of the City of a Thousand Planets is already in Earth orbit. It’s a sequence of humanism to rival anything in the Star Trek archive (recalling as it does the show Enterprise’s title sequence chronicling the progression of space travel). And while Valerian goes on to dazzle with visual wonders, the opening title sequence is so much the standout that you can be forgiven for walking out right then and there.

Diversity as pure addition – it doesn’t have to mean subtraction for anyone.

The case for the rest of the film is weakened quite a bit by the vapid lead characters. Dane DeHaan and Cara Delevigne play agents Valerian and Laureline, titular heroes of a vintage French comic strip now adapted into this $175 million-plus-budgeted blockbuster. Their corny sub-pulp fiction banter and flirtation feels like the throwback it was intended to be, but rests entirely on a chemistry that isn’t there, and absent emotions. Co-star Rihanna may not be a professional actor, but she still shows more humanity in 10 seconds than either lead does throughout the entire movie. DeHaan is much more at home navigating sinister sanatoriums and playing the antihero than he is as a Buck Rogers-esque action hero, and Delevigne continues her quest to convincingly show an emotion on screen. At least Jane Fonda as Barbarella, who shows that there’s precedent for bizarre 1960s French pulp heroes to translate to film, had screen presence and was more in on the cosmic joke. 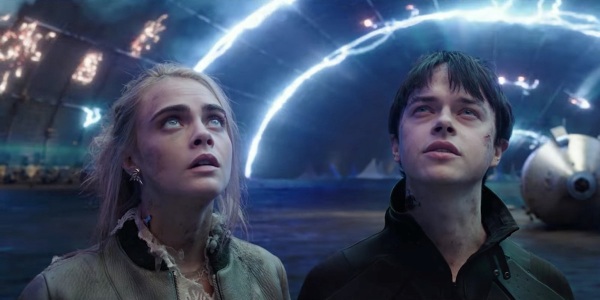 Our sickly leads. Maybe Dane DeHaan never left the Volmer Institute from A Cure for Wellness?

Trailers for Valerian billed it as based on the “legendary graphic novel”, but it’s more accurately a comic strip. And to match that, the film has a very episodic structure, all the better to slideshow its various spaced-out visual ideas and high-concept action scenes (interdimensional shopping!), all falling out of a very big and French piñata. This is the raison d’être of the movie, and the splendor of the world(s) is undeniable. It’s just a shame that a film so production designed to death didn’t invest the time to create characters worth caring about, and while there are interesting thematic elements to the plot (disrespect to one sentient race – incidentally with a coded transgender Emperor – becomes a nameless darkness that threatens the entire utopia), a story tying it all with a bow. There have been other significantly flawed but visually stunning movies this year, such as Kong: Skull Island and Ghost in the Shell. Let’s hope that future efforts balance the equation.

French visions of the alien

P.S.: Other aesthetic notes: As you can see above, long stretches of the film resemble nothing so much as a live-action take on René Laloux’ Fantastic Planet. Besson’s own Fifth Element gets a couple nods here in the form of a restaurant name and an equivalent sequence to the legendary “diva dance”. And in an ADR fail, I’m almost certain that for one important line, Laureline speaks while her mouth stays completely still.

P.P.S.: This is a semi-new category of review for the site, alongside the larger-scale film reviews with pretty pictures, editorials, franchise flashback, TV talk, and end-of-year review stuff. Mini-reviews are designed to take less time out of my schedule and hopefully a lot more are coming soon. As I see more and more movies every year (at time of writing, I’ve seen 55 2017 releases), my review productivity has gotten worse and worse. Mini-reviews are a new way to get more movie thoughts up on the site efficiently, but at the same time not just for new releases. And I know it’s a bit odd that this is the movie with which I’m coming back; there’ve been some heavy hitters I’ve missed reviewing. Perhaps pieces on some recent big names will turn up eventually; right now I’m at work on a big full-scale Fate of the Furious review. Happy viewing!