A bucket of pig’s blood falling on the innocent Prom Queen. A tragic death punctuated by endless streaming fireworks in the sky. A daring, near-silent heist of CIA headquarters. These are all images and setpieces orchestrated by Brian De Palma, a “Film Brat” director of the 1970s (think Spielberg, Lucas, Scorsese, Coppola), and one of the most dazzling technicians in film history. His use of split diopter, split-screen sequences, voyeuristic tracking shots, and montage is nothing short of thrilling when firing on all cylinders. 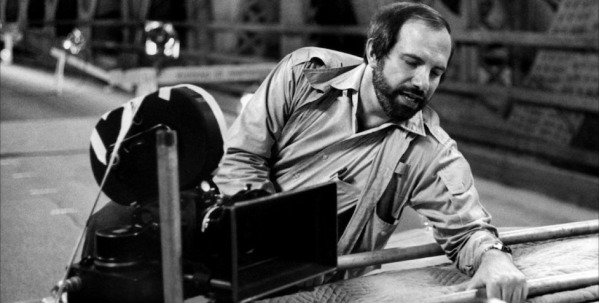 Exhibit A: Phantom of the Paradise (1974), a delightfully over-the-top earworm musical satanic bug-eyed spectacle, and a contemporary rock opera update of the “Phantom of the Opera” story. The film is a Technicolor dream/nightmare impeccably constructed to shock, amuse, and entertain, with catchy tunes sure to invade the viewer’s brain. The movie remixes the glammy shock rock of Alice Cooper, “The Picture of Dorian Gray”, Caligari-esque German expressionism, exceptional sound design, and pre-KISS black and white stage makeup to dizzying effect. Its tale of sleazy, pastel-colored rock musician backstabbing is delirious fun, and feels like what Russ Meyer and Roger Ebert’s Beyond the Valley of the Dolls should have been. Winslow Leach (William Finley) is the wronged rock musician who is horribly burned and dons the Phantom mask, and like everyone else in the movie, gives it his all and then some. All respect to the flickering shade of Lon Chaney, and the dulcet tones of Claude Rains, Emmy Rossum, and Gerard Butler, but Phantom of the Paradise blows straighter adaptations of the Phantom story out of the water, but not before electrocuting them.

Exhibit B: Blow Out (1981), a sober, downbeat, and captivating political thriller that is also filled with De Palma’s signature craftsmanship. John Travolta stars as a sound editor at a B-movie studio (close to De Palma’s heart, I’m sure) who unwittingly witnesses and records the fatal car crash of the leading U.S. presidential candidate. As a wider conspiracy unfolds, De Palma unleashes the full range of his talent. Montages play out the crash as the fateful tape is rewound and played over and over, Travolta and an owl are filmed strikingly in contrast through split diopter, and on the scuzzy streets of Philadelphia, John Lithgow’s terrifying government asset is right at home.

The two films are definitive masterpieces of pulp, and for much of his career, De Palma indeed churned out some high-grade pulp matter. Sisters (1973) stars Margot Kidder (RIP) as one half of a Siamese killing machine. The Fury (1978) ends with a human explosion so spectacular De Palma gives it to the audience from multiple angles and in slow motion. The masterful Dressed to Kill (1980) features Michael Caine in drag in a scary-as-hell elevator kill and museum chase, an almost exploitative Hitchcockian exercise. Snake Eyes (1998) lets Nicolas Cage off his leash in Atlantic City for a crazy movie-star performance; at first he seems like the sleaziest guy in the room (or stadium) but he ends up the straight man charged with uncovering a conspiracy.

I haven’t loved everything De Palma has done, however. Scarface (1983) finds De Palma at his most languorous and tepid, ambling through an overlong history stretched too thin that laughs in the face of narrative cohesion. Al Pacino’s Tony Montana characterization is that Joe Pesci in Goodfellas thing I hate, where anything and everything sets him off. Yes, the ending is legendary. Maybe fast-forward to that. And better yet, watch Carlito’s Way (1993), which finds Pacino back as a mobster looking to get out of that life. Pacino and De Palma’s reteaming for that movie makes it a soulful companion piece to the lazy excess of Scarface, and this time around Pacino is given some meat to chew on and turns in a thoughtful, complete performance.

As time went on, De Palma mounted muscular adaptations of existing properties The Untouchables (1987) and Mission: Impossible (1996). With the former, De Palma gave us a sprawling cops-and-robbers epic, an unforgettable showdown in a train station, and a rare tolerable David Mamet movie. With the latter, De Palma gave us a twisty tale of espionage that set the stage for one of our greatest action franchises. Mission to Mars (2000) is average, rote science fiction that takes a big Close Encounters of the Third Kind/The Abyss turn for the finale, which still proves magical.

The women in Brian De Palma films are too often just victims, particularly in Dressed to Kill and Blow Out (there the female lead is played by his then-wife, Nancy Allen). Michelle Pfeiffer in Scarface is especially tokenistic. On the more positive side, there’s a sweet give-and-take flirtation between Pacino and Penelope Ann Miller in Carlito’s Way, and Jessica Harper’s Phoenix in Phantom of the Paradise is formidable. But one film stands out as acutely representing female experience.

Carrie (1976) feels extremely rich thematically as a definitive horror take on female puberty, and features painfully real performances from Sissy Spacek and Piper Laurie. It builds the most exquisite tension, culminating in the show-stopping prom sequence, with the bucket of pig’s blood leading to a jaw-dropping climax of bloody revenge. Carrie feels perfect, and it holds the title for my favorite horror movie. The recent remake nailed the casting (Chloë Grace Moretz, Julianne Moore, Judy Greer) but otherwise just goes through the motions.

Brian De Palma’s most recent effort, Passion (2012), only has one sequence that (sort of) catches fire, and doesn’t live up to the premise of Rachel McAdams and Noomi Rapace in an erotic thriller. I put De Palma’s upcoming crime movie Domino (2018) in my list of most anticipated movies of this year because he is simply one of the greats. De Palma has to his credit been very open about the struggle of older filmmakers to recapture the creativity of their youths, but hopefully Domino is some type of return to form. He’s got an interesting core cast at least (Guy Pearce, Nikolaj Coster-Waldau and Carice van Houten from Game of Thrones). But even if it ends up worse than The Snowman, Brian De Palma has left an untouchable legacy, and his films will continue to inspire and shock forever.