First, a couple honorable mentions: Ariel Saves Eric and Commits to Her Choice, from The Little Mermaid. After a storm ravages Prince Eric’s ship, Ariel rescues him and takes him ashore. After he comes to and his men retrieve him, Ariel hides herself and reprises her “I want” song, “Part of Your World”, climaxing in the stunning moment when a wave crashes against the rock behind her. In this moment, she definitively makes a choice that was just a notion before, to become part of the human world. I also have to mention The Princesses Save Ralph in Ralph Breaks the Internet. In a sublime moment of fanservice, the Disney Princesses combine their skills to break Ralph’s fall. In terms of pure crowd-pleasing catnip it’s spectacular, but I don’t think it’s fair to run that moment in competition.

5) Tiana Breaks Dr. Facilier’s Talisman, The Princess and the Frog

While the decision to turn Tiana into a frog for much of the film’s runtime feels ill-considered, it is in frog form that Tiana shows the strength of her character. After Dr. Facilier murders Ray, he turns his attention to Tiana. Facilier tempts her with a vision of her dream restaurant up, running, and thriving, but she rejects his manipulation and shatters the McGuffin he’s so desperate for. This unleashes a phantasmagoric sequence, where Facilier’s “friends from the other side” come to collect his soul. And besides, Tiana knows she must earn her restaurant’s success through hard work, not by an ill-gotten shortcut.

4) Ice Palace for One, Frozen

Elsa inherited a castle from her parents. But her existence there was marked by repression of her true self. So when the people of Arendelle and its political peers see Elsa’s magical ice powers and react in fear to that which they don’t understand, Elsa sings an anthem of self-expression while building a palace entirely of herself. As “Let it Go” catapults emotion across the screen like a trebuchet flinging snowballs, Disney’s animators give us the unforgettable spectacle of Elsa creating an entire palace, culminating in Elsa magically manifesting her iconic ice dress. 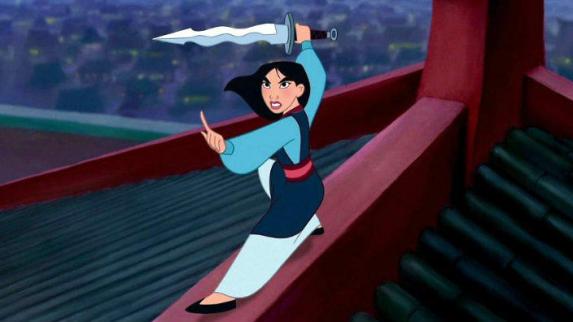 After single-handedly crippling the Hun army (a potential entrant on this list all on its own), Mulan is outed as a woman but still warns of Shan Yu’s infiltration of the Imperial City. After Shan Yu’s sheer advantage in size overwhelms Li Shang and Mulan in turn, her fight with the Hun leader moves to a rooftop. Mulan, desperate for a weapon, produces the fan she brandished earlier in the movie when dressing up for a matchmaker. After Shan Yu taunts, “It looks like you’re out of ideas”, Mulan disarms him with the fan and takes his sword in an efficient punch-the-air moment.

2) Anna Sacrifices Her Kingdom to Save it, Frozen 2

For Anna, all hope is lost. She’s auditioned for Les Miserables with her song “The Next Right Thing”, wherein despite knowing her sister and Olaf are dead, she resolves to carry on and do what’s right, no matter how painful. So she wakes up the Earth Giants to destroy the Northuldra dam, the monument to Arendelle’s colonialist sin. Knowing the flood will destroy Arendelle, Anna invokes her royal authority to enlist the help of Mattias and his soldiers in taking desperate action. To be a Princess of a Kingdom is to understand the responsibility of power, and Anna’s decision to proactively confront the shameful history of Arendelle is a stunning display of leadership.

For the length of the movie up to this point, Moana has believed that Maui, who stole the heart of Te Fiti, must restore it. But the power to do so has always been hers, as she has the insight to see through the corrupted form of Te Ka to the goddess underneath. So Moana parts the sea, sings to the kaiju-size fire demon, and saves it. In practice, this is mythic, poignant stuff supported by astonishing visuals. It gives me goosebumps every time. “They have stolen the heart from inside you / But this does not define you”, Moana sings to the molten monolith, before restoring that heart and saving the entire ocean from magical infection. A badass power move if ever I saw one.